Chair: Peter Miles: I first became a Member of the Friends when Dennis Farr was the Director of Birmingham Museum and Art Gallery, before he was appointed Director of the Courtauld Institute Galleries and moved the collection to Somerset House.
That was 51 one years ago, perhaps making me the longest-serving Member?! Together with a couple of other people, I started arranging the events programme which John Pownall took over when I stepped down. And so this is my second stint on the Friends Committee, many years later.
I am a semi-retired surveyor and still enjoy the cut and thrust of the business world. I am also chair of the Midland Antiques Society, a board member of the Birmingham and Midland Institute and I sit on the Public Art Committee of the Civic Society.
And, of course, I have a passion for Art.

Peter Baker: Born in Birmingham, I have happy childhood memories of visiting the old science museum in Newhall Street with the excitement of pushing buttons to make things clank and move plus being awestruck by the sound recording of the tram which I longed to board!
My memories of early visits to the museum and art gallery are more hazy but I do recall discovering Birmingham’s magnificent collection of Pre-Raphaelite art and being excited by the positive outcome of the “Bring the Bellini to Brum” campaign.
In the 1990s I had part time employment in youth and community work which gave me the chance to visit local galleries on my days off. Later, until retirement, I worked for a railway company and I happily used my travel pass to visit exhibitions and installations across the country. If the galleries of the North broadened my knowledge of Pre-Raphaelite art, the galleries of London and the South introduced me to the amazing variety of twentieth century art.
Since retirement I have been a member of the Art Fund and I enjoy reading about the artists themselves using the ArtUK website. I’m looking forward to working with the other trustees to support and encourage local artists and curators publicising the amazing range of art and culture to be enjoyed in the West Midlands.

Stephen Hartland: I am a Business Consultant based in Birmingham. My interests are wide and varied, but are largely focused on citizenship and the active pursuit of making a difference in the city. I try to achieve this through membership of various organizations which include Board Member and Trustee of The Birmingham Civic Society, for which I chaired the Planning Committee from 2001 to 2007. I was also founder member and the first Chairman of Birmingham Trees for Life (2005-2007) which has planted over 100,000 trees in the city since 2005. I have been a member of The Victorian Society since 1983 and has sat on the Executive Committee of the Birmingham and West Midlands branch since 2002, becoming Chairman in 2009.
In addition, I sat on the Board of the Perrott’s Folly Company from 2003-2008. I have personally campaigned on a number of other concerns affecting the standard of living of Birmingham’s citizens, including the successful campaign against the introduction of bus lanes and widening of Hagley Road. This also saved the King’s Head Public House and 76 Hagley Road (Early c.19, Grade II) from demolition, as well as hundreds of mature trees.
From a heritage viewpoint, I chair the Public Art Committee of the Civic Society (2002-2007 and 2012 to date). I am the 99th Churchwarden of the Parish of St Augustine of Hippo, Edgbaston and a licensed Lay Minister.

Jane Howell: In 2000 I became a Guide/Enabler for Birmingham Museums, giving tours at the Museum and, later, at the Museum Collections Centre (MCC). Since then I have worked for BMT as a Shop Assistant, an Administrative Assistant and a Visitor Assistant, working with the public on the front of house. I enjoyed all of those roles but giving tours was, and still is, my favourite!
In 2006 I joined the Friends and have been involved on and off ever since. Most recently, until BMAG was closed due to Covid 19, I organised events and talks with BMT and within the Birmingham area, taking Friends Members on visits to local places of interest. But my passion is giving tours of the wonderful Art collection housed in BMAG. In the past the permanent displays didn’t change much so the challenge was always to find new angles from which to discuss familiar works. It will be interesting to see how the galleries will be hung once this frustrating but necessary closure for refurbishment is over. I hope to still be fit enough to devise tours about the works then on display!

Rosalind McCarthy: I live in Sutton Coldfield and have two sons and two grandchildren. Originally I worked in the criminal law but after having children I became involved in voluntary work helping to organise a computer learning centre and luncheon club for the elderly. I am a speaker for The Leprosy Mission which I enjoy immensely. My interests are varied but music and the arts are high on my list. Having sung for many years with the Sutton Coldfield Chamber Choir I now sing as a cantor at a church in Kingstanding. Occasionally I try to make mosaics using traditional methods, with varying degree of success.

I am a Public Artist and sculptor working mostly in metal from my Studio Workshop in Cradley Heath. I graduated from Reading University in 1985 and started my career as a sculptor the following Spring, based at the Nicholas Treadwell gallery near Canterbury in Kent, exhibiting my work internationally through the gallery.
In 1988 I moved to the West Midlands and, in the early 1990s, I began to specialise in Public Sculpture with a strong consultative design process, working with regional Arts agencies, local authorities and schools around the Black Country and Birmingham and receiving several notable commissions – which thankfully has continued to date.
I am also a lead Arts consultant, a School Governor and member of the Civic Society’s Public Art Committee. 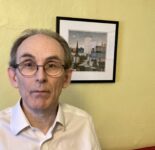 Jim Wells: Having been a regular visitor to Birmingham Museums as a child, with my own children, and now with my grandchildren, it is a pleasure to make a contribution with the Friends to the continuing development of these wonderful venues. With a professional background in education and cultural services it is good to be able to use the knowledge and skills I have gained over the years for the benefit of the Friends, an organisation that dates back to the 1930s.