Changing Birmingham – its people and places: Finding a Voice

Exploring the database of the Friends’ acquisitions since 1931, which is now available on our website, I have discovered some interesting acquisitions – including an impressive painting of a large public meeting in Birmingham: ‘Meeting of the Birmingham Political Union’ by Benjamin Robert Haydon. My quarterly article in ‘Artefacts’ seemed a good opportunity to investigate the story behind it!

Click here or on the image below to read more. 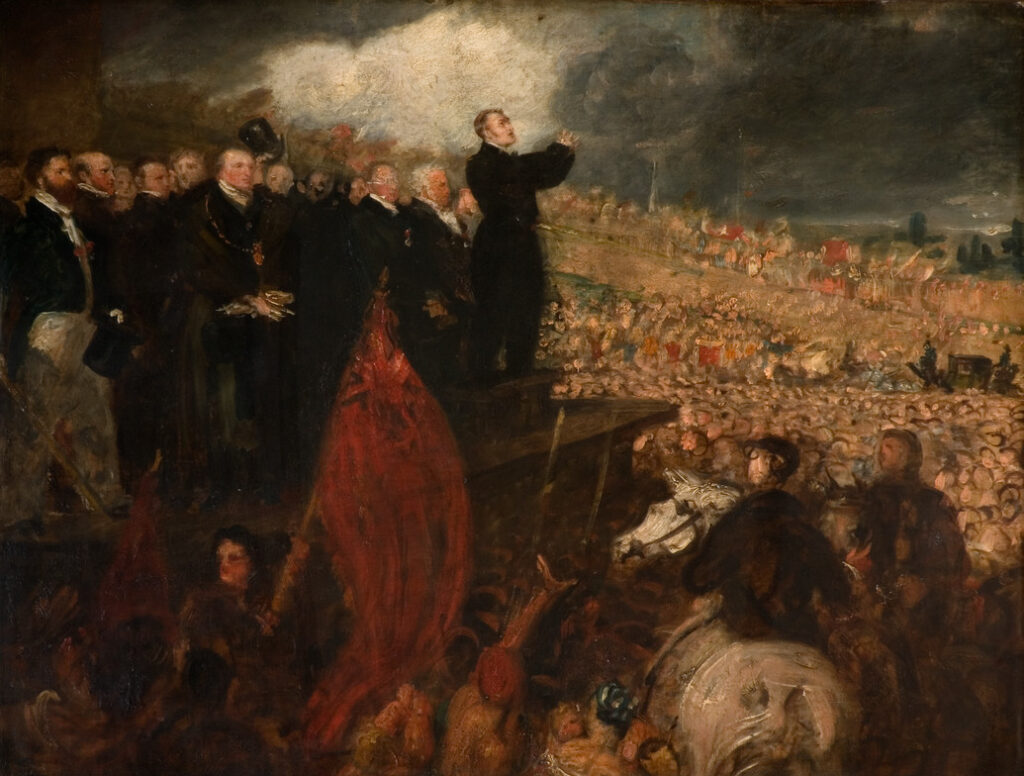 Changing Birmingham – its people and places:
Keep on Running

A sporting theme seemed the obvious choice for the Summer 2022 edition of ‘Artefacts’, given the imminent arrival of the Commonwealth Games in Birmingham from 28 July 2022. Sport, in the form that we now recognise, largely originated in the period of codification and regulation in the mid to late nineteenth century, with Birmingham being the location for a number of firsts. Please click here or on the image below to read more.

NB. This is an extended version of the feature that appeared in ‘Artefacts‘, Summer 2022 – Issue 69. 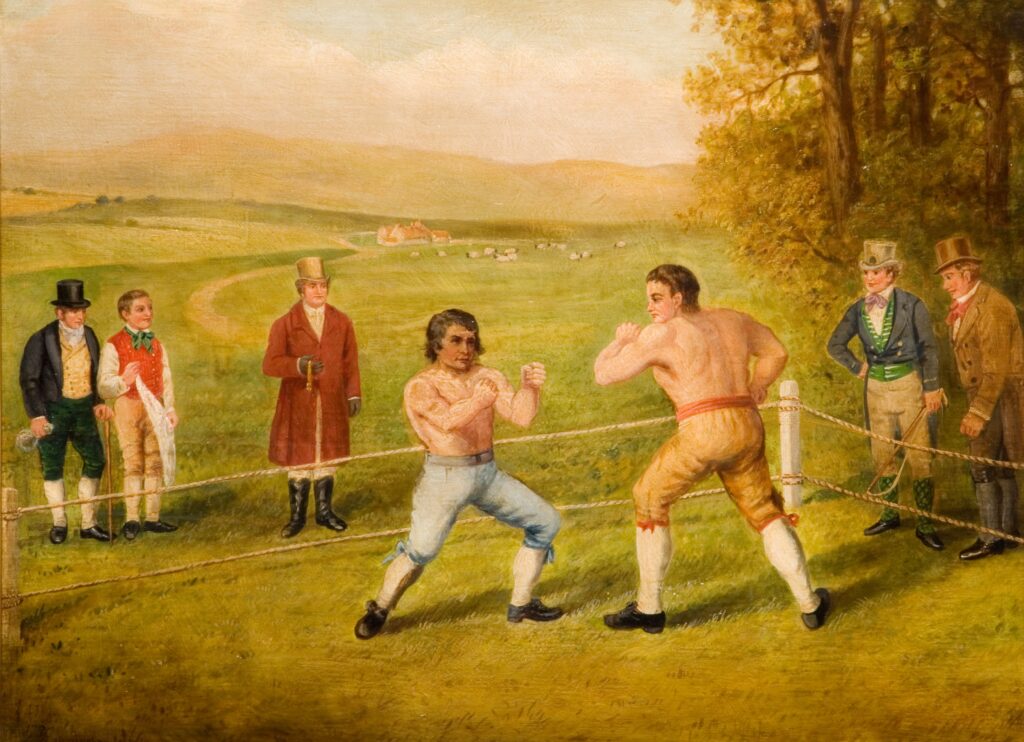 The Spring 2022 edition of Artefacts seemed to be an appropriate place in which to explore both the history and representation of our public parks using Birmingham Museums Trust’s Digital Asset Resource. Providing the green lungs for our city, the development of Birmingham’s public parks came about as a result of the same social movement that produced Birmingham’s Museum and Art Gallery. To find about more, please click here or on the image below.

NB. This is an extended version of the feature that appeared in ‘Artefacts‘, Spring 2022 – Issue 68.

Adjacent to a famous football ground is a magnificent piece of Jacobean architecture, Aston Hall. They both share something in common – the ‘Holte’ name. The Holte family association with Aston Hall dates from 1631 when Sir Thomas Holte moved into the new Hall he had commissioned, until 1817 when the Hall had to be sold to pay debts. However, the name carries on in the Holte End stand of Villa Park. To find about more about the Holte family and their relationship with Aston Hall, please click here or on the image below.

NB. This is an extended version of the feature that appeared in ‘Artefacts’, Winter 2021 – Issue 67.

At a recent exhibition titled ‘Women Power Protest’ there was a striking portrait of Catherine Osler, one of the key leaders in the Birmingham Women’s Suffrage Society. Given how few portraits there are of Birmingham’s female political figures from that era in the collection, Jim Wells investigates the story behind the portrait.  Click on the painting of Catherine below to read the story:- 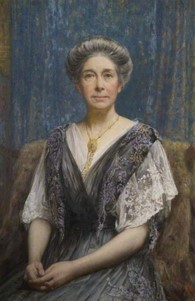 The Birmingham History galleries at BMAG hint at many stories. Although they are not open for the moment, you can sample some of this material thanks to the efforts of Friends’ member and trustee, Jim Wells. Here he tells how Birmingham citizens over many centuries have developed education ideas and policy.
Click on the picture to read the story:-

During 10 days in early August 2020, our deputy chair at the time, Jane Howell, declared her own personal commitment to support the Birmingham Museums Trust (BMT) during its enforced shut-down. She committed to walk between all nine sites that comprise the BMT group. Her initial aim was to raise £1000.

* You might not be surprised to know that she completed the walk.
* You might be more surprised by the success of her fund-raising.
* Most surprising of all is the engaging character who was with her all the way!!

To read her story of the walk, which happened during some of the hottest days we have experienced this year, click the picture here:-

With building work being completed and the Town Hall coming back to its full glory it felt like a good time to look at its history both as a building and a venue.

The development of the Town Hall is inextricably linked with the Triennial Music Festival (1784-1912), the funds from which helped support the Birmingham General Hospital. Venues such as St Phillips were becoming too small for the festival so the organisers asked the Town Commissioners for a venue to hold 3000 people at an estimated cost of £20,00. In 1830 a design competition was launched with Hanson & Welch chosen as architects and Thomas  Kendal as builders. The actual cost was £25,000 far exceeding the original estimates, causing Thomas Kendal to go bankrupt, an event that has a very contemporary ring to it.
The exterior of the building is based on a three quarters scale reproduction of the Temple of Castor and Pollux in the Roman Forum, with republican overtones reflecting the radical politics of Birmingham at the time. During its construction two workers were killed and are buried in the grounds of St Phillips, marked by a pillar base. The interior has been modified a number of times, with major changes in 1927, but the recent renovation has largely restored it to its original layout.
For further information there is an excellent insight into the architecture involved in the Town Hall by Andy Foster in the Pesvner guide.
Opening in 1834 our next most significant date is 1846 and the association of the Town Hall with Mendelsohn and his choral work Elijah. Mendelsohn was commissioned by the Festival organisers and paid 200 guineas for the work and it put Birmingham on the national music map. Reviewed by the Times: ‘The last note of Elijah was drowned in a long continuous unanimous volley of plaudits, vociferous and deafening’. The work was performed at every festival from that date and continues to have a strong association with the City, the original score was purchased by the Council in 1991.
Coming into the early twentieth century we start the period of Elgar’s dominance in producing work for the Festival. His first commission was for a choral piece based on Cardinal Newman’s poem The Dream of Gerontius. Despite a poor first performance due to chaotic preparations it received great critical claim home and abroad. He went onto produce three further pieces, conducting The Apostles himself at the Town Hall in 1903, and becoming a well-known public figure with a knighthood in 1904.
Whilst music has always been at the centre of the Town Hall programme, it has hosted a wide range of other events since 1834. Continuing our connection with the Sturge family, the niece of Joseph and Sophia Sturge features in a significant event at the start of the campaign for women’s suffrage. The Birmingham Women’s Suffrage Society had been formed in in 1861 and Eliza Sturge became the secretary in 1869. In 1872 Millicent Fawcett, whose statue is in Parliament Square, addressed a large meeting on women’s suffrage at the Town Hall, and representing Birmingham. Eliza made a speech which was reprinted as pamphlet titled ‘On Women’s Suffrage’. She went on to be elected to the Birmingham School Board where she proved to be a valuable member. The current exhibition “Power to the People” provides some more interesting artefacts related to this topic, well worth a visit.
From Dickens to Black Sabbath, Paul Robeson to David Bowie, the Town hall has provided an inspiring venue for performers over the years and continues to do so, holding a special place in Birmingham people’s memories.
Let us know about your memorable experiences at the Town hall on our Facebook page www.facebook.com/friendsBMAG

Below is some suggested reading if you wish to explore further.